TUMPAT, KELANTAN, 25 June 2022 – As part of its commitment towards addressing the environmental sustainability, UMW Holdings Berhad (“UMW Group”), in collaboration with UMW Toyota Motor (“UMWT”) and UMW’s associate company, Perodua, aims to give roots to 300,000 mangrove trees spanning across Malaysia by 2023 through the UMW Green Shoots (“UGS”) Initiative.

The launching of the UGS Initiative was symbolised by the planting of mangroves trees by YB Dato’ Sri Mustapa and the invitees at Pantai Sri Tujoh, which was joined by student volunteers from Universiti Malaysia Kelantan. A total of 1,200 mangrove trees were planted at the selected site today, which is part of the UGS Initiative’s target to plant 10,000 trees across the shore of Tumpat.

To ensure the success and sustainability of the UGS initiative, the Group is collaborating with Yayasan Hijau and Malaysian Nature Society. The other parties supporting the initiative include the Ministry of Energy and Natural Resources, the Ministry of Environment and Water, National Forestry Department and the respective state departments, who will assist in identifying key locations for tree planting and coordinating the activities involved. Astro has been roped in as the education partner for the UGS initiative to support the Group in spreading awareness on the importance of environmental sustainability, particularly on the importance of trees to the environment through the tree planting activities nationwide as well as the various television programmes and social media platforms by Astro.

The UGS Initiative is also in line with the Malaysian Government’s National 100 million Tree-Planting Campaign 2021 – 2025, which was launched in January 2021.

“The UMW Group wishes to demonstrate the need for a balance between economic progress and care for the environment. We are committed to achieving carbon neutrality by 2050, and in so doing, we have chosen to integrate sustainability into our business strategy and approach. The Group has been increasingly adding to the country’s green cover as one of our initiatives to mitigate the greenhouse gas (“GHG”) emissions while gradually embedding circular economy principles in our business operations. It is imperative that everyone plays a part in tackling climate change and, through the UGS initiative, we are taking steps towards investing in nature-based solutions for carbon sequestration,” Dato’ Fuaad reiterated.

Over the course of the next two years, the identified locations will involve the planting of mangrove saplings. With the dwindling mangrove trees in the country, it is crucial that restoration efforts of these mangrove swamp forest ecosystems are hastened as it provides infinite value to coastal protection and the country’s biodiversity as well as food resources. Mangroves provide a slew of benefits for coastal human communities as they act as storm barriers by protecting inland areas from flooding and erosion, help filter river water of pollutants and trap excess sediment before it reaches the ocean as well as help safeguard a wide array of wildlife, especially the marine life. More importantly, mangroves also have a big impact on climate. Studies have shown that, mangroves can sequester two to four times more carbon than mature rainforests.

Commenting on the initiative, Ravindran Kurusamy, President of UMWT said, “Toyota has always been passionate about the environment. Here in Malaysia, UMWT wants to continue to make a difference for a greener, more sustainable future. We hope that the UGS Initiative will engage, educate and empower Malaysians to ensure the future generations will live and prosper in a cleaner and greener environment.”

Meanwhile, Datuk Zainal Abidin Ahmad, President and CEO of Perodua remarked, “The UGS Initiative compliments our green initiatives such as installing solar panels at our headquarters as well as introducing a carbon neutral policy to ensure our operations and practices preserve and protect the environment.”

Apart from the involvement of UMW employees, customers, as well as the local communities, the Group will collaborate with the Ministry of Education via Yayasan Sukarelawan Siswa, local universities such as University Malaysia Pahang, University Technology Malaysia, University Kebangsaan Malaysia and schools to enable participation of youths in the initiative. The UGS Initiative will also extend invitation to the customers of Toyota and Perodua as well as their families to participate in the tree planting activities nationwide.

Henry Tan, Group CEO of Astro said, “As a voice for good, Astro applauds UMW Holdings Berhad for its UGS Initiative for taking this significant step to contribute to environmental sustainability. We share and support this effort as the educational partner covering content on TV, radio and digital to create awareness for this important cause.”

Dato’ Fuaad further added that over and above the tree planting efforts, the Group intends to instil awareness on environmental conservation and restoration within the community, especially among the youths, through on-the-ground activities as well as knowledge sharing.

“Educating and creating awareness about the environment would instil lifelong learning and lead to behavioural change for the betterment of the environment. We aspire for this initiative to kickstart a movement on environment conservation that will lead to, among others, “1 Malaysian planting 1 tree a year” as a simple contribution towards our sustainable future especially for our younger generation,” he concluded. 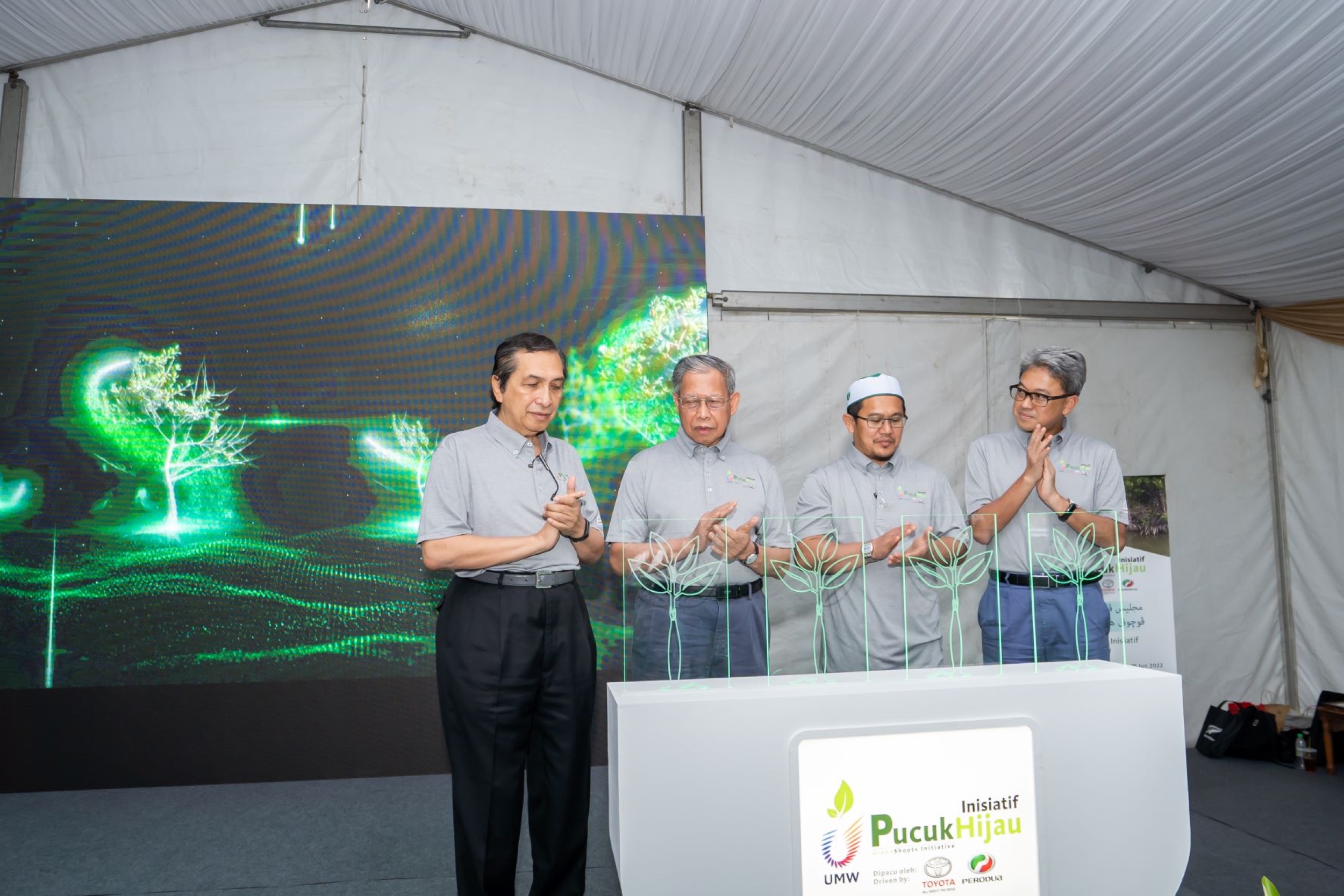 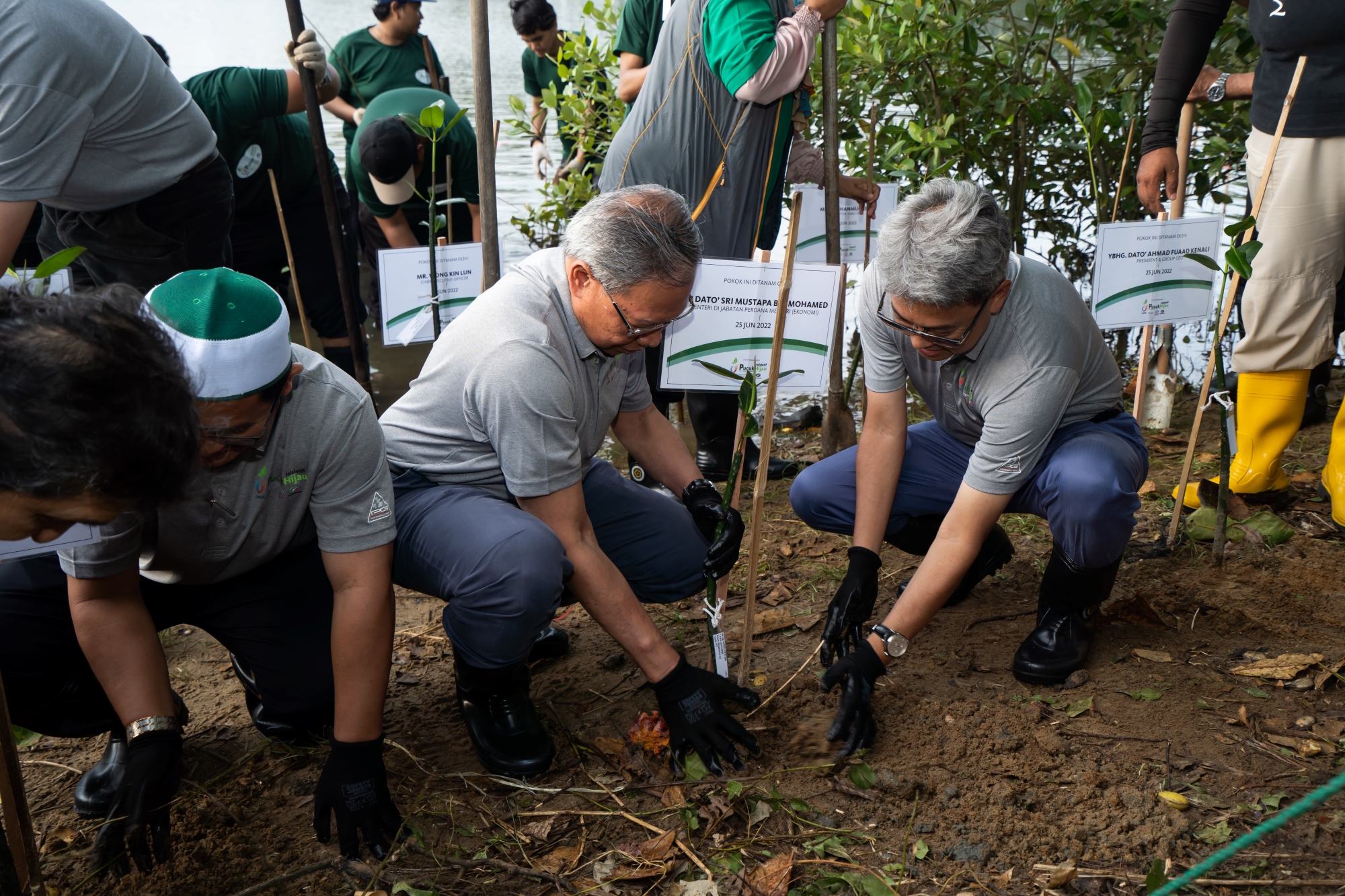 The launching of the UGS Initiative was symbolised by the planting of mangrove trees by YB Dato’ Sri Mustapa Mohamed, Minister in the Prime Minister’s Department (Economy) (second from right). On the right is Dato’ Ahmad Fuaad Kenali, President and Group CEO, UMW Holdings Berhad.

We Care
STAY IN THE KNOW
Sign up for email updates and be the first to know of the latest developments from UMW.
Please register here